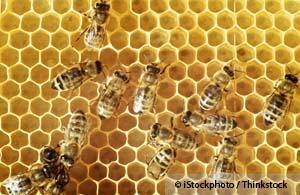 Propolis, the "caulk" honeybees use to patch holes in their hives, has been used as a natural remedy since ancient times, treating ills ranging from sore throats and burns to allergies.

New research has revealed another exciting use for this seemingly miraculous substance, this time in the fight against cancer.

Propolis has a number of well-known therapeutic properties, including potent antioxidant and anti-microbial action, and healing, analgesic, anesthetic, and anti-inflammatory properties. In the hive, bees use it as a disinfectant against bacteria and viruses, helping to seal cracks and "embalm" invaders that are too large to carry out.

It's been used for thousands of years in folk medicine, but despite its plethora of active components, research on this compound, and therefore its modern medical uses, is limited.

Researchers from the University of Chicago Medical Center, intrigued by propolis' anti-cancer potential, decided to look at one of its bioactive components, caffeic acid phenethyl ester (CAPE), and its impact on human prostate cancer cells.

In cells grown in a lab, even small doses of CAPE slowed the growth of tumor cells. And when low oral doses were given to mice with prostate tumors, tumor growth slowed by 50 percent! What's more, feeding CAPE to mice daily caused the tumors to stop growing, although they returned when the CAPE was removed from their diets.

This suggests the propolis compound works by impacting signaling networks that control cancerous cell growth, rather than by killing the cells directly. However, there are at least four studies on propolis' apoptotic properties, indicating that technically it is capable of directly killing cancer cells, including prostate cancer, melanoma and more, as well.

This is not the first time propolis has shown promise in treating cancer. In 2009, propolis was found to suppress the growth of neurofibromatosis-associated tumors (tumors on nerve tissue) by blocking PAK1 signaling. Researchers noted:

Since more than 70% of human cancers such as breast and prostate cancers require the kinase PAK1 for their growth, it is quite possible that GPE [green propolis extract] could be potentially useful for the treatment of these cancers, as is Bio 30 [a CAPE-based propolis extract].

What makes natural compounds so exciting, and often so powerful, is that they don't simply exhibit one therapeutic action the way, say, most drugs work. Instead, they contain numerous bioactive components that may exert dozens of beneficial actions within your body. This appears to be the case with propolis, which has been found to play a role in over 80 conditions, including:

Writing in "Clinical Reviews in Allergy and Immunology", researchers expanded on some of propolis' potential effects:

Propolis, a waxy substance produced by the honeybee, has been adopted as a form of folk medicine since ancient times. It has a wide spectrum of alleged applications including potential anti-infection and anticancer effects. Many of the therapeutic effects can be attributed to its immunomodulatory functions. The composition of propolis can vary according to the geographic locations from where the bees obtained the ingredients.

On the other hand, they also have potential antitumor properties by different postulated mechanisms such as suppressing cancer cells proliferation via its anti-inflammatory effects; decreasing the cancer stem cell populations; blocking specific oncogene signaling pathways; exerting antiangiogenic effects; and modulating the tumor microenvironment.

Earlier this month I interviewed Dr. Ron Rosedale for several hours. He is one of the first physicians in the U.S. that started measuring leptin levels clinically and was far ahead of the curve on this one. In our interview, he helped me understand the major importance that excessive protein intake can have on cancer growth.

The mTOR pathway is short for mammalian target of rapamycin. This pathway is ancient but relatively recently appreciated and has only been known for less than 20 years. Odds are very high your doctor was never taught this is medical school and isn't even aware of it.  Many new cancer drugs are actually being targeted to use this pathway. Drugs using this pathway have also been given to animals to radically extend their lifespan. But you don't have to use drugs to get this pathway to work for you.

You can biohack your body and merely restrict your protein intake and replace the decreased protein with healthy fats as this will provide virtually identical benefits as these dangerous and expensive drugs.

Eating excessive protein can be an additional synergistically powerful mechanism. Dr. Rosedale believes that when you consume protein in levels higher than one gram of protein per kilogram of LEAN body mass you can activate the mTOR pathway, which will radically increase your risk of cancers. It is very easy to consume excess protein and my guess is that most people reading this are. I know I was, and as a result of this new insight I have reduced my protein intake by about half.

To determine your lean body mass find out your percent body fat and subtract from 100. So if you are 20% body fat you would have 80% lean body mass. Just multiply that times your current weight to get lean body mass. For most people this means restricting protein intake from 35 to 75 grams. Pregnant women and those working out extensively need about 25% more protein though.

Of course when you reduce protein you need to replace it with other calories, so the key is to replace the lost calories with high-quality fats such as avocados, butter, coconut oil, olives, olive oil, nuts and eggs. It is also very helpful to avoid eating anything for three hours before going to bed as this allows you to have relatively low blood sugars while you are sleeping. This is another good trick to move your body to fat burning mode.

Nearly everyone is primarily in carb burning mode because of the amount of carbohydrate content that they consume. The beauty of shifting over to fat burning mode is that it virtually eliminates hunger. Intermittent fasting is one way to help achieve this, but radically cutting back on non-vegetable carbs is also very important. Coconut oil is particularly useful to use in making the transition to fat burning mode as it is primarily short and medium chain fats which break down very quickly and can be used as an energy source which is important for countering the decreased energy and other physical challenges that many encounter in the several weeks it typically takes to make the transition to fat burning mode.

One of the reasons why conventional cancer treatment is such a dismal failure in the United States is because it relies on chemotherapy. Chemotherapy drugs are, by their very nature, extremely toxic and typically work against your body's natural ability to fight cancer, e.g. destroying host immunity instead of supporting it.

One of the biggest drawbacks to chemotherapy is the fact that it destroys healthy cells throughout your body right along with cancer cells, a "side effect" that often leads to accelerated death, not healing.

Another devastating side effect of chemotherapy is the way it actually supports the more chemo-resistant and malignant cell subpopulations within tumors (e.g. cancer stem cells), both killing the more benign cells and/or quiescent cells within the tumor that keep it slow-growing, or even harmless.

As a result, this unleashes a more aggressive, treatment-resistant type of cancer to wreak havoc on your body.

Like propolis, a handful of natural compounds have been discovered that show promise for treating cancer without such toxic effects. Some of these even exhibit an effect called "selective cytotoxicity," which means they are able to kill cancer cells while leaving healthy cells and tissue unharmed, and even benefited one such compound is bromelain, an enzyme that can be extracted from pineapple stems. Research published in the journal Planta Medica found that bromelain was superior to the chemotherapy drug 5-fluorauracil in treating cancer in an animal study.

"This antitumoral effect [of bromelain] was superior to that of 5-FU [5-fluorouracil], whose survival index was approximately 263 %, relative to the untreated control."

What makes this impact particularly impressive is that the bromelain worked without causing additional harm to the animals. The chemo drug 5-fluorauracil, on the other hand, has a relatively unsuccessful and dangerous track record despite being used for nearly 40 years. Selective cytotoxicity is indeed a property that is only found among natural compounds; no chemotherapy drug yet developed is capable of this effect. Aside from bromelain, other examples of natural compounds that have been found to kill cancer cells without harming healthy cells include:

When it comes to cancer and other chronic diseases, effective prevention trumps progressive treatments in my eyes. I believe you can virtually eliminate your risk of ever developing cancer (and radically improve your chances of recovering from cancer if you currently have it) by following some relatively simple risk reduction strategies - all of which help promote a healthful biological environment in which your cells can thrive and combat disease naturally.

Our Updates Are Continuous. To Keep Up On The Latest Postings, Please Visit Our Website Frequently.

PLEASE NOTE:
Although I research extensively, I have no professional medical training.

This material is presented as a guide to give you and your health care provider some things to discuss.

Any information contained in these pages should never substitute for advice from your physician.

Take vitamins and supplements only on the advice of your physician.